This is the final post for Get Noticed 2017 competition, so it’s time for some summary 🙂

I finished it 🙂 I managed to find a time and I worked hard. During the competition I had problems, similar to ones that can be found in all IT projects – stuff doesn’t work as I think it should, other things took longer that I expected they’ll take. I had problems sticking to the schedule – many times I post only one text a week, sometimes didn’t post anything, but in the end I managed to write 20 posts and I’m happy about that 🙂 I also very happy that I wrote some not-entirely-technical posts – about perfectionism, JavaScript, simplicity and programmist cartoons 🙂

On the things that didn’t go entirely well and could use some improvement I see that I still have a problem with perfectionism 🙂 I focused mainly on the technical part of the competition, constantly adding new features until I become tired of this project and I’m still not satisfied with how much I’ve done. Although I did quick a lot – 202 commits in the last three months. I just think that for the future I should focus more on showing what I’ve done, then waiting until it’ll be “perfect” to show. Because I worked so much I didn’t even have a lot of time to check out other people work, but reading all the stuff created by them wasn’t an easy task either – it was, and still is a lot of knowledge!

I’m also not really happy about post quality. When I started this blog I had a very manageable, minimal goal – write 1 post every 3 months. That way I could have time spend some time on text itself. I haven’t had this oportunity in competition and I feel that becauese of that I didn’t created something as good as it should be. Althougth, there is a thing that helped me a lot – Grammarly. It is a plugin for Chrome, that checks a text you write for grammatic errors. Based on number of errors it finds in my texts regularly – I really needed it 🙂

I really wanted to check out ASP.NET Core in some project, bigger that simple tutorial page. TeamScreen was ideal for it. There was a lot of problems during development of whole .NET Core – json/csproj issue, constantly changing APIs and now complicated library ecosystem with the introduction of .NET Standard. Many people, myself included lost track of whats actually goind on in .NET world. I wanted to bring myself to speed and check if ASP.NET Core is valid for new project. So is it? Well… not really, but it depends. The biggest advantage of .NET Core in my opinion is cross-platform – if you need that – go with ASP.NET Core. On the other hand – rest of new features is not really worth it, especially when you want to use libraries developed for previous versions of .NET framework – there aren’t cross-platform, so you whole solution can’t be cross-platform. ASP.NET Core is definitely a thing of future, but I think it’ll be at least another year until it becomes a standard. Although, a year is a lot of time in IT and new concept are introduced constantly, who knows, maybe serverless will be more popular then?

So how TeamScreen looks now? I think it still needs some work, for example – there isn’t an easy way to install it – you need to download source, compile it and deploy manually on IIS. I wanted to use Docker to ease this process a little, but unfortunately, I haven’t had time for it 🙁 From the time perspective plugins weren’t such a good idea for the first version of the application – it could easily work not being entirely generic and saved time I could use on something else. Finally, I’m full of shame for not enough unit tests 🙁 Ok, so what is actually working? Quite a lot of stuff: 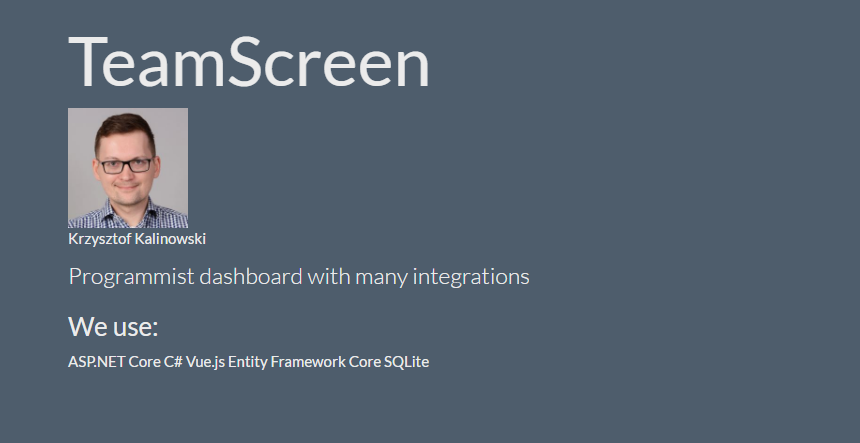 In the end I did quite a lot and I’m happy about it 🙂 There are things that need improvement, but this is how life looks like – it’ll always be something that needs to be fixed 🙂 If you want to check out source code – it’s here and here you can find all posts from the competition. Thank you if you stuck to this moment and if you have some comment, please don’t hesitate and leave it in the comment section. I think I’ll spend some time on the further development of TeamScreen and on this blog, but this time without the time pressure, hope to see you next then 🙂