Last three post were about creating a general architecture for TeamScreen application – handling views, settings, and plugins itself. Today’s post will be about polishing it. First screens showing how TeamScreen looks now: 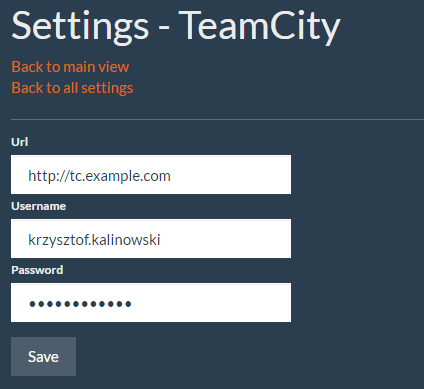 In my opinion is definitely an improvement from how it looked before. I changed the bootstrap theme to use something more darkly by using SuperHero theme from Bootswatch site. Other minor things regarding UI:

On the backend I mostly finished work started in previous weeks:

There is still a lot of work to be done and my standard problem is that I have more ideas than time 🙂 The base architecture, I think, is in pretty stable condition, although the TeamCity and JIRA plugins definitely will be developed more in the future. After all the work, I think, I earned the privilege to raise the version to 0.4 🙂 Plan for the nearest future is to at last add more plugins!

You can get the source code here, but I must warn you that, it is still pretty rough and works only on my computer – I’ll fix that in the future. For now, thanks for reading and I hope to see you next time 🙂